Most people who go to the cinema indulge in some popcorn, a fizzy drink or some pic n mix. But last week my husband and I enjoyed a film, and an amazing 11 course food and drink extravaganza. We were invited to The Trafford Centre’s ‘Dare to Dine’ event.  In the run up to the event we literally had no idea what was in store for us, other than we were to meet in the Ambar at 6.30pm. The Ambar is next to the Odeon Cinema, so we had an idea a film and some sort of meal would be involved. We were welcomed into the bar with a glass of champagne and given the following menu

The ‘Dare to Dine’ event was an exclusive showing of the film, 20 years after it was released. Food and drink would be served at the exact time the lines were delivered in the film…. plus a few surprises thrown in. And if you hadn’t guessed which film we were seeing…… Pulp Fiction. *whispers* I have never seen this film. Husband has seen it a few times, and we were both really excited for the night ahead.

We were led into the cinema and sat in our allocated seating. The lights were dimmed and the film started. Even though I had not seen the film before, I still recognised most of the music. Not long into the film and the first line was delivered

“You know what they put on French fries in Holland instead of ketchup?” . The fantastic waiting on staff quickly brought out a box of French Fries with mayo courtesy of McDonalds, and a very refreshing Kronenbourg. 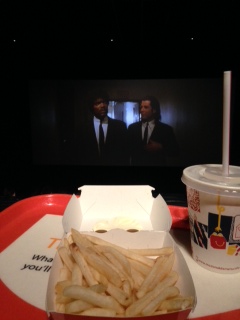 “Mmm, this IS a tasty burger !” and oh MY yes it was. Next up was a Big Kahuna cheeseburger with pineapple courtesy of Five Guys. Hubby is a huge burger fan, and we will definitely return to Five Guys. 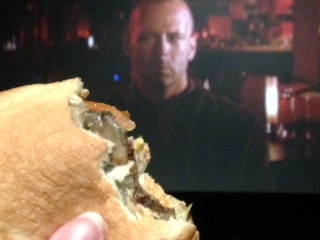 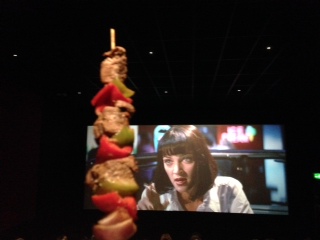 “I got to know what a $5 shake tastes like” A gorgeous and creamy vanilla shake from Ben and Jerry’s at The Odeon. 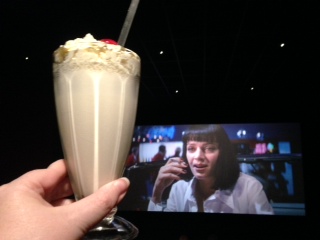 “A shot in the heart” Adrenalin cocktail from the 360 Champagne and Cocktail bar. 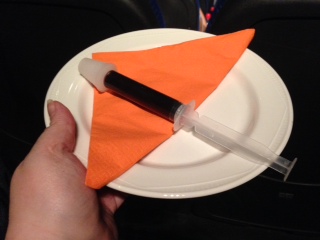 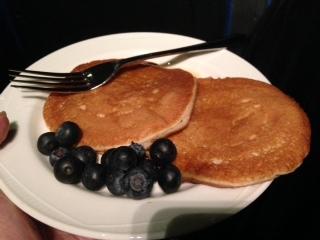 “Hey, sewer rat may taste like pumpkin pie, but I wouldn’t know cause I’d never eat the filthy mummyfluffer !” Pumpkin Pie Martini courtesy of TGI Fridays. This was SUCH a nice cocktail 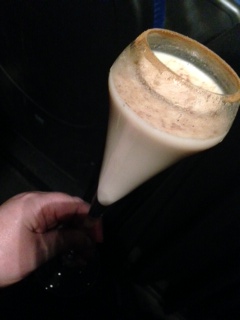 Not only were we treated to such an amazing experience, the whole team came in during the famous dance scene and danced along in the aisles. Great effort by them all.

After the film we literally had to be rolled out. The whole night had been amazing. The team have to be congratulated on getting the food to us, more or less at the exact time the line was delivered in the film. No mean feat I can imagine. Also a huge thanks to the following who supplied the food and drink on the night, and The Odeon and Ambar.  All of the below are located in the Trafford Centre.

My husband and I are still talking about the evening nearly 1 week on. I have a feeling that on our next visit to the cinema, a bucket of popcorn just won’t be the same. A huge thanks to the Trafford Centre and Carousel PR Manchester for such an unique event as part of the Big Treat event. THANK YOU.

6 thoughts on “Dare to Dine Event at The Trafford Centre”