Zhu Zhu hamsters are the devil. Not because they fail to turn off, but because one of them was the reason my son had to have his first operation. 4 years ago my son dropped a Zhu Zhu hamster on his foot. At the time I remember him crying and me soothing him with a cuddle and some chocolate no doubt. His nail broke and I assured him that it would grow back in a few short weeks.

Fast forward 4 years. Son has half a nail on his toe but he was forever knocking it and it kept bleeding LOTS (mainly over the bathroom carpet… joy). It was time to visit the doctors who referred us to a consultant at the local hospital.  He took one look at his toe and advised he would need an operation to repair the nail. Eek an operation. I have been parenting for nearly 13 years and avoided any ops and broken bones. I would now have to deal with my son being put to sleep, and wear my brave Mummy face.

The operation was yesterday. We had to arrive at the hospital for 11.30am as he was on the afternoon list. I felt victorious after finding a car park space in only 10 minutes. Believe me I have driven round for a good 30 minutes on previous visits. We were shown to his bed on the ward and he was quickly immersed in his PS Vita. We waited over 3 hours until he was called up to theatre. I must admit the time went fairly quickly thanks to Loose Women, OK magazine and social media.

We walked up to theatre and my stomach was churning, so god knows how he was feeling. All the nurses and doctors in the anaesthetic room were so lovely. They did a great job of distracting him whilst they hooked him up to various machines. The ‘magic medicine’ went in and within a few seconds he was asleep. And that is when my brave mummy mask crumbled, and I filled up with tears as I kissed him and saw him being wheeled into theatre.

The logical part of my brain knew he was in safe hands. It was a minor operation and it would only take 30 minutes. But its just the vision of your baby being put to sleep. I know some parents have the pain of watching tiny babies go through this, and that must be even worse. I walked down to the café and cradled a coffee, and twitter and text messages saw me through. My husband had offered to come to the hospital, but I knew that my brave mummy mask would have crumbled long before it did, as I would have passed the ‘brave parent’ baton to him.

I walked back up to the theatre and 5 minutes later I heard the words ‘Morgan’s Mum’. The nurse was smiling and assured me everything had gone fine and he was asking for me in recovery. He was understandably groggy, and I gave him the biggest hug. He was wheeled back down to the ward, and soon he was eating toast like there was no tomorrow. A few hours later and we went home, armed with a bag of drugs and a rather fetching sandal he has to wear.

The whole day had been long and exhausting, but hearing the nurse say what a fantastic patient he had been was lovely. She was right. He never moaned or complained once. He seemed so calm in those minutes before his op, and I was so proud of the way he handled his first ever operation. My son is growing up, and it was lovely to see this in difficult circumstances. He definitely deserved the McDonalds and the Film and Comic Convention tickets he got when we returned home. 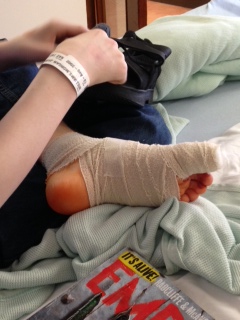 4 thoughts on “The tweens toe operation”