Well after a 2 month break from blogging I think its about time I got back to it, and told you what us Williams have been doing recently. It has been a crazy 3 week start to the Summer holidays. The last 21 days have seen us holiday in such fantastic places as Corfu, Scotland and a ‘theme park visit’ down South. I thought I would start with the theme park visit and especially the Chessington Hotel which we stayed in on Saturday night.

I had booked the hotel as a surprise for our sons 12th birthday. We went and had a look round the hotel last year when we went to the theme park and I was very impressed. At the time I had mentally put it on the bucket list, and combining it with our sons birthday was a good idea. Especially as he had asked for an expensive ipod and I needed to ‘pad’ his presents at a little !! Win win eh.

We stayed in the original Chessington Hotel which has a safari theme. The brand new hotel, Azteca, had only opened a few days earlier, which is an add on to the existing hotel done in a Mexican theme. We checked in quickly and found our room on the 3rd floor. We had been upgraded to a savannah view, and I must say the room was excellent. It had the kids area when you first walked in with 2 single beds and a TV you can play interactive games on. Then the bathroom, and then into the grown up part.

I had made a reservation for dinner in the new Azteca Hotel (basically because I wanted a nosey round it). Dinner is served in the Temple Restaurant and we were all really impressed with the buffet selection on offer. It was also nice to see that soft drinks were included in the price. There was some entertainment going on in the bar area, which the younger kids seemed to be enjoying. Though to get to the restaurant you have to navigate a packed dance floor of kids. I think I took a few out on the way !

Overall I actually preferred the existing hotel rather than the new one. It was lovely to eat breakfast overlooking the reserve, and of course have our bedroom overlooking it too. Though when the husband opened the curtains, I don’t think he was expecting to see some Ostrich sexy time !

We also used the swimming pool, which now has the added attraction of a Splash area much the same as at the LEGOLAND hotel. Most kids seemed to be in the main swimming pool and the Splash area was fairly quiet. It was nice to sit in the hot tub on a Sunday afternoon and see animals sauntering past. 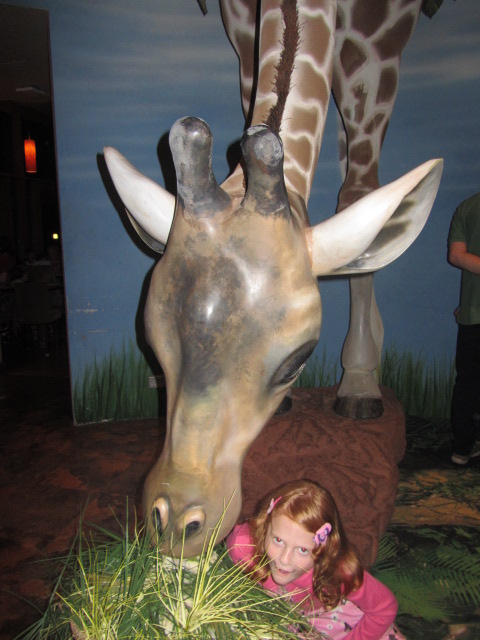 We paid £141 for our stay which was bed and breakfast for 2 adults and 2 children. This was discounted as we have a Merlin card. I actually think this is a good price considering the quality of the hotel. I would definitely say it is veering to luxury, whilst also being really family friendly. We would definitely look at returning in the future. Thank you Chessington for a great stay.