Last week the hubby and I managed some fantastic ‘us’ time. I really think that its important to get away once in a while if you can, and enjoy some  time just being a couple. We are lucky because I have a great Mum, and we try and get out at least once a month for a meal or a trip to the cinema. For birthdays and anniversaries we like to get away, and a night away in a Premier Inn does us just fine. Well it was hubs birthday last Wednesday (he turned 43 if you are wondering), and as we had booked to see John Newman in concert in Manchester we just had to combine it with a night away. My Mum was booked in, and I was quickly on the Premier Inn website. We chose to stay at the Premier Inn at the Trafford Centre. Basically Lady Gaga was also playing in Manchester, and the prices of the hotels in the city centre were crazy. I have stayed at the Trafford Centre West around 12 times and love it there. I paid £35.00 which I was more than happy with.

So last Tuesday we set off around 1.30pm, and checked in at 2.00pm….. yep the official check in time. I am never one to waste some hotel time. We took the bags to ‘our room’…. Yes I have a favourite room and always ask for it !!! We went over to the bus station at the Trafford Centre as we were getting the bus into the city centre. Last time I was on a bus was in Disneyworld in Florida. As you can imagine, the sights were ever so slightly different. However, we did drive past Old Trafford (yawn) and also past the HUGE Hilton Hotel which has about a million floors, and for our 10 year anniversary we stayed on the 21st floor.

As I knew retail therapy was not on the cards (couldn’t really turn up to a concert with shopping bags in hand), the only other option was to eat and drink. We chose to go to Bem Brasil. This is somewhere where we had both wanted to visit for ages. I made sure we got in there before 4pm as the price before is £13.95, and after 4pm a whopping £26.95. Bem Brasil was amazing. The food was to die for, and after eating half a zoo we literally had to be rolled out of there, into the howling wind and rain. We walked up to the Printworks and indulged in a few more drinks, whilst people watching. Around 7pm we took a taxi over to The Apollo which is on the out skirts of the city centre. We were seated and enjoyed the support act, and then John Newman came on at 9.15pm. WOW what a concert. He was amazing live, and if you don’t know who he is please seek him out on you tube. After the concert we got a taxi back to the hotel and had a few more gins….. for the road of course.

Next day it was hubby’s birthday. I had only took one present to the hotel, as the kids wanted to be there when he opened his main presents. So I opted to give him this present. Yep having an ‘unique’ name meant I had to order him a special coke bottle with his name on. He was made up. 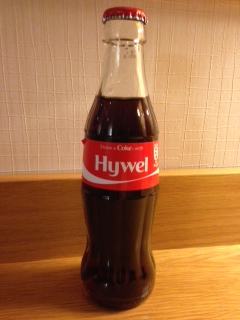 Finally it was time for some retail therapy, and we had a day of wandering around the Trafford Centre to look forward to. Hubby had some birthday money which he spent, and I even let him have some ‘man’ time in the Apple Store ! It was time for some lunch, and as it was his birthday I said I would treat him to anywhere in the Trafford Centre. After a five second think he chose……… Burger King ! Lunch done and a few more hours of wandering and it was time to head home to pick the kids up from school. We had such a fantastic time, and I am really grateful that we get the chance to go away and have fun together. It was a blast and can’t wait for our next night away. Do you get the chance for ‘us’ time or even ‘me’ time ?