You know when you have a really good night out and you are still giggling about it days later. Well that’s me at the moment. The reason for this is Chris Ramsey. Chris Ramsey is a fantastic stand up comedian, and he has just started his new tour this week. The opening night was in our home town, and the second the tickets went on sale I was there, bagging 2 seats on the front row. I know…… the dreaded front row. We had sat at the front before, so I was willing to take a chance again. 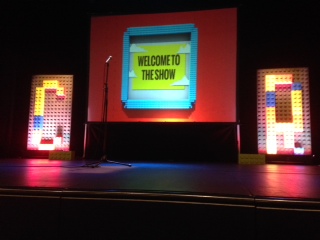 His show this year is called ‘All growed up’. It gets us thinking what makes us become a grown up, though I suspect Chris will never grow up due to his Lego collection and his trampoline in his garden. Chris is a comedian that shares his life stories, turns a normal trip to his beloved Nandos into a hilarious encounter. And believe me Chris, once you have seen your wife give birth there will certainly be more hilarious/embarrassing events to share.

As soon as Chris comes on stage, he instantly builds a fantastic rapport with his audience. Imagine my sheer delight when he pointed at me and said ‘hello Tracey’. My years of stalking him on twitter had paid off lol. If you are sat in the front row there is a good chance he will chat to you. He is not one of those nasty comedians, who will take the piss out of your weight, clothes, hair colour etc. He uses this as an ice breaker, and I love that he gets the audience involved at the start.

Now by all means sit in the front row, but NEVER get up to leave your seat. Especially if your wife is having a choking fit and desperately needs a drink. Yep this was my husband, and while he was out getting a drink, Chris wanted to know his name. Now I imagine you don’t get many Hywels living in Runcorn, so obviously this was comedy gold for Chris. Later that night we were reading the tweets from the gig, and it seemed that Howl, Howell, Howel was some kind of internet superstar.

If you have never been to see Chris Ramsey, you HAVE to go and see him. We have been lucky that we have been to every single tour he has done, plus seeing him support Russell Kane. He is touring all over the UK up until the 4th December 2015, and then restarts in February 2016 to the 24th April 2016.  I presume he is having a break, as Chris will be taking on his most important role as he becomes a Dad. I wish him and his wife the very best of luck with parenthood.

A full list of his tour dates can be found on his website. We paid £17.50 each for our ticket, and I guarantee you will be crying with laughter during the evening. Chris also comes out to meet his fans at the end of the show.  A great night as always at The Brindley Theatre in Runcorn. Cheers Chris and best of luck for the rest of the tour, and also Carl Hutchinson who is the fantastic support act.

2 thoughts on “A night of laughter with Chris Ramsey”