On Tuesday we visited Blackpool Pleasure Beach. We last visited around 10 years ago when our son was a baby, and we were all looking forward to our day out which happened to also be on hubbys 42nd birthday. As I am a complete money saver when it comes to days out, I ordered 3 tickets from my Tesco Clubcard. I then purchased 1 more child ticket when we got there for £26.99. The whole day for the 4 of us would have been £123.98 !

We got to the Pleasure Beach for 10.15am and exchanged our tickets for wristbands and entered the park. We had picked a really good day to go as most of the schools break up next week (hooray for an early half term) and also the weather forecast was showers. No bother as we were armed with raincoats and we are theme park experts for rainy forecasts. Some of the rides do have a staggered opening, with some not opening till 11.30am. We headed over to the new Nickelodeon land which I think had opened last year. This area was really good with lots of rides in. My daughter is now 7 and just getting too old for Dora, but for anyone younger this part of the park would be fantastic. There is however a great coaster in there that the kids dragged me on. I screamed lots !!!!

The new Wallace and Gromit ride is also fantastic with great theming. This was the longest queue we encountered which was around 10 minutes. We also went on lots of the older rides such as The Haunted House and The Grand National. Our kids are used to going to Alton Towers as we have Merlin Cards, but they loved the older rides just as much as the flashy big rides Alton Towers have to offer. And I was very impressed that our 11 year old braved the Big One and 7 year old braved The Avalanche, whilst I looked on from the safety of the ground and waved at them.

Overall I was very impressed with the Pleasure Beach. Last time we went it was full of drunks staggering around. Thankfully this has now changed (thanks to the charge for entering the site) and I found the Pleasure Beach a clean and friendly theme park full of families having a good day out.

Special mention to the 2 older guys who work on the camel derby on the way out. They were great fun and very engaging with the public as they were leaving. And the best bit……. Husband won a packet of spongebob pens !!!

We thought we would only be in the park a few hours but after getting there for 10.15am we left at 5.00pm. We all had a great day out and we will certainly return in the very near future. 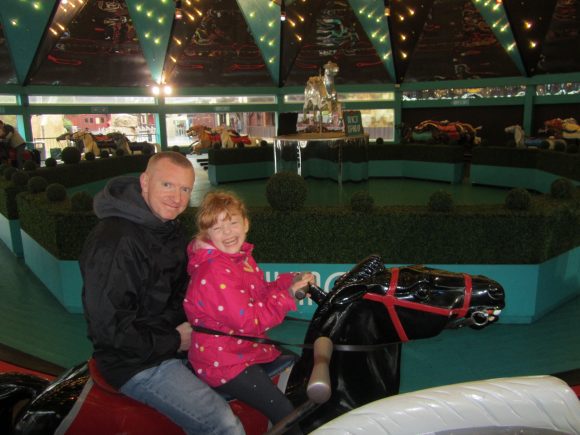