Well that half term seemed to go in a blink of an eye. I think we had a good mixture of ‘doing days’ and ‘chilling days’. Here is what The Williams got up to

Friday – This was the day the kids broke up, and I had a lovely get together with 3 friends. Wine was consumed together with laughter and chatter.

Saturday – Hubby, daughter and I headed to Chester Zoo. The tween stayed behind as he wanted to go to his media course, which my mum took him too. Had a lovely day wandering around the zoo. In the night time hubby cooked a Valentines meal complete with champagne.

Sunday – Hubby and I went to a hotel in Knutsford for Sunday lunch. I had won a competition on twitter back in December, and we had a lovely meal there and will definitely return.

Monday – I was working so my mum looked after the kids. In the night they both went to their clubs (karate and cubs). This was a first for half term as cubs is not usually on. Bonus was hubby coming back with home made muffins from daughters friend.

Tuesday – This was our ‘sociable day’. Started with meeting a friend for coffee. Took daughter as she was happy with the ipad and a Costa hot chocolate. Then in the afternoon we met for lunch with my best friend and our children. We had a lovely catch up and a giggle with the ‘tweens/teens’. Then it was straight to my mums for pancakes.

Wednesday – Daughter had her friend round to play for a few hours. They had a great time, whilst the tween stayed out of the way !

Thursday – Chilled morning followed by lunch at subway as requested by the kids. Makes a nice change from McDonalds. In the afternoon it was coffee and catch up with my friend before we headed to Slimming World.

Friday – Kids had a PJ day today. In the evening we went out with our friends to Frankie and Bennys. Great night filled with nice food and fantastic friends.

Saturday – We had planned to go for a walk but it was pouring down. We opted for Starbucks instead, and we spent a lovely hour chatting with the kids. There was not an iPod/iPad/IPhone in sight. 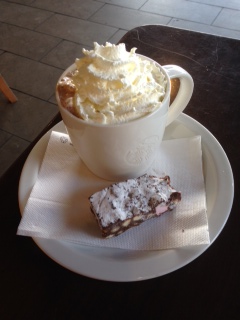 Sunday – A totally chilled out day was had by all. Caught up on a few jobs around the house, and tackled the mountain of ironing. Back to the school runs and routine tomorrow.

Looking back on our half term, it was fairly chilled out. January had been really busy for us, and I think the kids were craving some down time. I always think the kids should be out doing things, but in reality they are just as happy to be at home. What did you get up to this half term ?